After left-wing New York County District Attorney Alvin Bragg’s office reversed course on prosecution of a Hamilton Heights bodega worker for murder after he killed a man who attacked him, other leading New York State lawmakers were slammed for their silence.

While New York City Mayor Eric Adams celebrated the reversal and has in recent weeks been lauded by supporters of Jose Alba as a rare Democratic voice calling out Bragg’s initial decision, both U.S. senators from the Empire State remained largely silent.

Sens. Charles Schumer and Kirsten Gillibrand represent New York in the Senate, while Manhattan Island where the incident occurred is represented in the House by Democratic Reps. Jerrold Nadler, Adriano Espaillat, Nydia Velazquez and Carolyn Maloney.

On “The Five,” host Dana Perino questioned the silence of Schumer, who is the most powerful member of the Senate, asking where his voice has been these past few weeks.

“Where was AOC [Rep. Alexandria Ocasio-Cortez, D-N.Y.]? Where were any of the New York State [and] local [politicians]? Where was Chuck Schumer – did you ever hear from him? I don’t think so,” she said, adding that for prominent entities like Schumer – who has been in Congress since 1981 – and the New York Times, “this is your city.”

“You’re the ones that are that want to see everybody come back to work. You want to see the city flourish: Then you have to start figuring out a way to put pressure on Alvin Bragg as finally [Adams] did.”

Late Tuesday, Espaillat, who represents the site of the incident and like Alba is a Dominican immigrant, praised Bragg’s decision, saying the case “did not go unnoticed” among constituents and credited the prosecutor for dropping the case.

“Today’s dismissal is a step in the right direction, and I commend the mayor for increasing the mobile unit of NYPD officers in the Hamilton Heights community,” he added in a statement.

Will Hunter be indicted?

Another Teacher goes prowls his kids

*NEW* BREAKING: Illegal Mexican Sentenced To 34 Years And When You See What He Did You Will See RED
America's Freedom Fighters 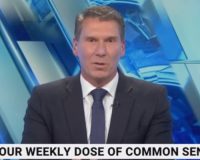 Top 8 things MOST WANTED by the demon-infested humanoids that walk among us
August 8th, 2022 DC Dirty Laundry

III% Alert: We WILL Fight and I WILL Lead — NO MORE EXCUSES AMERICA!!!
August 8th, 2022 DC Clothesline

Instead Of 0 Over 30 Years, Fourteen Canadian Doctors Have Died In The Past 14 Months After Taking The Experimental CONvid Shot
August 7th, 2022 Sons of Liberty Media
FEATURED VIDEO