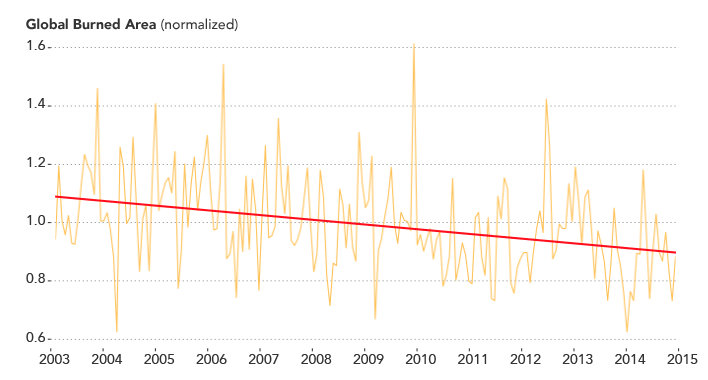 The whole world is burning, The New York Times, CNN, and mainstream media outlets around the world have declared in recent days.

The Amazon could soon “self-destruct” reports The Times. It would be “a nightmare scenario that could see much of the world’s largest rainforest erased from the earth,” writes Max Fisher who notes, “some scientists who study the Amazon ecosystem call it imminent.”

“If enough [Amazon] rain forest is lost and can’t be restored, the area will become savanna, which doesn’t store as much carbon, meaning a reduction in the planet’s ‘lung capacity,’” reports The New York Times.

It’s not just the Amazon, though. Africa, Siberia, and Indonesia are also apparently going up in smoke. Claims The New York Times, “in central Africa, vast stretches of savanna are going up in flame. Arctic regions in Siberia are burning at a historic pace.”

Any reader of the New York Times and other mainstream media outlet would be forgiven for believing that fires globally are on the rise, but they aren’t.

In reality, there was a whopping 25 percent decrease in the area burned from 2003 to 2019, according to NASA.

And against the picture painted by celebrities and the mainstream media that fires around the world are caused by economic growth, the truth is the opposite: the amount of land being burned is declining thanks to development, including urbanization.

Read the rest at: No Fires

The Cycle of The Abominable: Volodymyr Zelensky “Person of the Year”
December 8th, 2022 Sons of Liberty Media

10 Most SURPRISING and DANGEROUS ingredients in vaccines, and the industry’s poor explanations for why they’re used
December 8th, 2022 DC Clothesline
FEATURED VIDEO