About a year ago I made one of the more risky decisions of my life – one that I knew could hurt my career as an actress. I decided to come out of the conservative closet and admit to my peers that I was a conservative in Hollywood.

Yes, hard as it is for some to believe, not everyone in the entertainment industry on the Left Coast is a left-winger.

An acquaintance had asked me to write for a right-of-center political magazine. I realized I would be outing myself by doing it, but I ended up writing a few dozen articles with a right-leaning libertarian slant that were well received.

Sadly, the magazine closed and I was faced with two options.

Members of the Hollywood left don’t want to listen, discuss,
or even see a dissenting viewpoint that challenges their own comfortable
echo chamber. It’s ironic that an industry that constantly talks about
diversity is so judgmental, hateful and utterly rigid in its groupthink.

Option 1: I could start apologizing to all my Hollywood liberal friends and associates who’d been shocked by my writing and tell them: “I didn’t really mean it … it was a paid gig and I was simply doing it for the work.”

Option 2: I could have the courage of my convictions and continue down the conservative path.

The first option may have brought me liberal forgiveness. Let’s be honest, many of us in Hollywood “whore” ourselves out for work, a pay check and another credit for our resumes.

But I knew if I took Option 1 that I would have to never speak or post anything that even squeaked of conservatism again. I would have to nod and agree with all the constant comments and wild accusations against President Trump – “the racist,” “the misogynist,” “the one who is trying to destroy the world.” Sigh.

Read the rest at: Liberal Hollywood 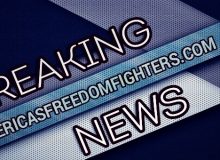 *NEW* BREAKING: Inmate Who Robbed Gang of 176 Kilos Of Cocaine Had Loaded Gun Inside His NYC Prison Cell- How Did It Get There?
America's Freedom Fighters

Are World Tyrants Using The Words Of Vladimir Lenin As A How To Guide? You Tell Me!
September 24th, 2022 Sons of Liberty Media

No New Material Today Folks, I Had a STROKE
September 24th, 2022 DC Clothesline