College should be a place where students learn about the world and discovered their place in it. However, the campuses have become dangerous places. For the past months, fraternities were making headlines and not for their positive impact in universities, but for their open attacks on females students.

Recently, Sigma Nu students at Old Dominion University in Norfolk, Virginia decided to receive the incoming female freshmen with misogynistic banners. They had messages hanging from their residence that said:

“Rowdy and fun. Hope your baby girl is ready for a good time”

“Go ahead and drop off Mom too.”

After this incident, ODU president John Broderick condemned the students’ actions in a statement posted on the university Facebook page.

…While we constantly educate students, faculty and staff about sexual assault and sexual harassment, this incident confirms our collective efforts are still failing to register with some…
I said at my State of the University address that there is zero tolerance on this campus for sexual assault and sexual harassment. This incident will be reviewed immediately by those on campus empowered to do so. Any student found to have violated the code of conduct will be subject to disciplinary action…

Unfortunately, this is not the first time a member of Sigma Nu found themselves in hot water.

Another Sigma Nu chapter at the University of Central Florida recently found itself in hot water after a student videotaped members of the frat, including a man accused of sexual assault, chanting “let’s rape some bitches” at an off-campus party.

Although some people and media outlets want to minimize the fraternities’ misogynistic behavior and labeled it a “joke.” The truth is there are numerous incidents committed by these groups.

According to the Guardian, studies reveal that

Even if the current incidents took place in off-campus residences, it is important for the schools, students, and other authorities to take actions and not ignore the display of hate that could eventually lead to assaulting of women.

Read more at Identities.Mic & The Guardian 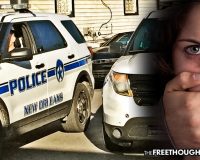 Multiple Cops Ignore Citizens Flagging Them Down to Report a Rape Taking Place on the Sidewalk in Front of Them
August 17th, 2022 Sons of Liberty Media